Getting wild with chicken soup 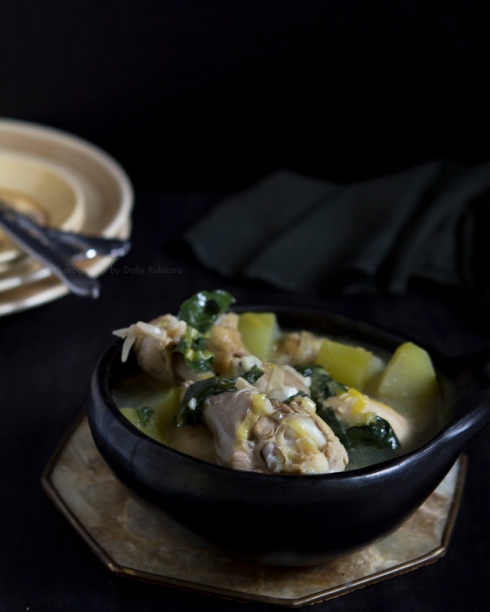 HAVE YOU EVER EATEN something that made you happy? I don’t mean ‘happy’ in a conventional way, but ‘happy’ in a wild sort of way. Well, I have. And it’s not illegal!

Autumn in New Zealand means cold, wet and windy. But it’s pretty much like that (in Wellington) every day regardless of season. We have been blessed with summer this year, though. Unbelievably long stretch of sunny, bright and warm days! But that was history already. This weekend it was raining the whole time. After my pottery class I decided to stay indoors and cook whatever was available in the kitchen. Comfort food on a cold day. Chicken Tinola it was to be!

Chicken Tinola, an authentic Filipino recipe, is a light chicken soup where ginger is the key ingredient. It is cooked with vegetables which traditionally include green papaya or chayote squash and chili pepper leaves. I had chayote (called sayote in the Philippines and choko in New Zealand). But I had no chili pepper leaves. 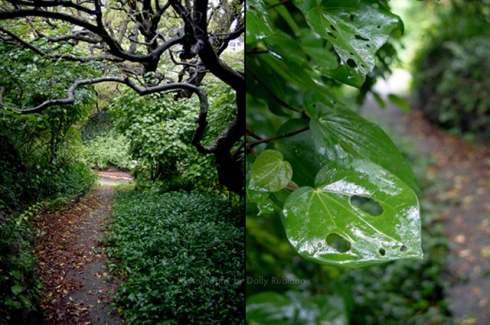 Coincidentally, a lovely friend of mine, who is married to a(n equally loveable) Māori bloke , lent me a cookbook by Charles Royal. Charles is an acclaimed Māori chef specializing in indigenous cuisine and is known for cooking on the spot with wild plants just gathered. My friend pointed to me the edible leaves in my garden that Charles used in many of his recipes!

Kawakawa or pepper tree is prolific over much of New Zealand and is traditionally harvested for its medicinal properties. It is shaped like a heart and good for the heart. But there’s more to it as I found out later. 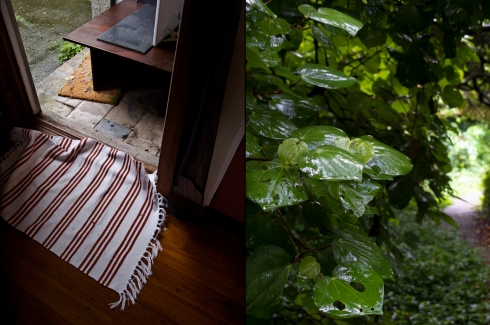 Armed with a colander and a pair of scissors, I went outside to harvest my chili pepper leaves substitute, hoping I would not die in the process (by either chewing on some poisonous leaves or finding caterpillars on the leaves!)

According to Charles Royal, despite their appearance, the kawakawa leaves with the most holes were sought by many of the old people who deemed the little caterpillars only chewed the best. So I picked only the best I could find (in the tradition of wabi-sabi!)

For this wild version of a traditional recipe, I used leek instead of onion. Leek has become my personal favourite since a few weeks ago. 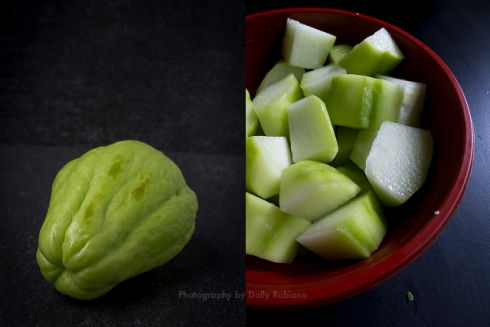 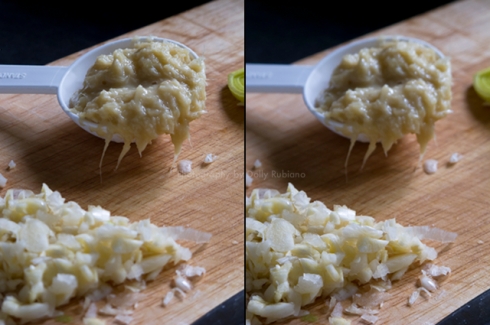 And the result? The chicken soup served with steamed rice was marvelous! I’m not sure if the kawakawa leaves made any difference. But it did make a difference to my disposition a few leaves later.

I googled Kawakawa and discovered (no surprise there) that the leaves are mildy euphoriant. Kawakawa is related to Kava. The whole plant is an aphrodisiac and stimulant. (My boyfriend asked me to bring some when I go visit him =)

I also made kawakawa wafer leaves by cooking them in hot oil and munched on them in between (photo) shoots. It was a happy day!

I am passionate about photography and food is my favourite subject. I like shooting people too, especially when they’re not looking. I am a regular contributor as photographer to FishHead magazine, a local lifestyle magazine in Wellington, New Zealand. I blog about my experiments in the kitchen and don't cook anything that has four legs. Please get in touch if you would like to work with me regarding food styling and photography. END_OF_DOCUMENT_TOKEN_TO_BE_REPLACED
This entry was posted on Wednesday, April 24th, 2013 at 12:35 AM and tagged with authentic, chayote, chicken, choko, filipino food, food, kawakawa, maori, photography, sayote, stew, tinola, wabi sabi and posted in Meat. You can follow any responses to this entry through the RSS 2.0 feed.
« Making authentic vegetable tempura – the Wabi-sabi way
Minted pea custard with kawakawa »

12 responses to “Getting wild with chicken soup”